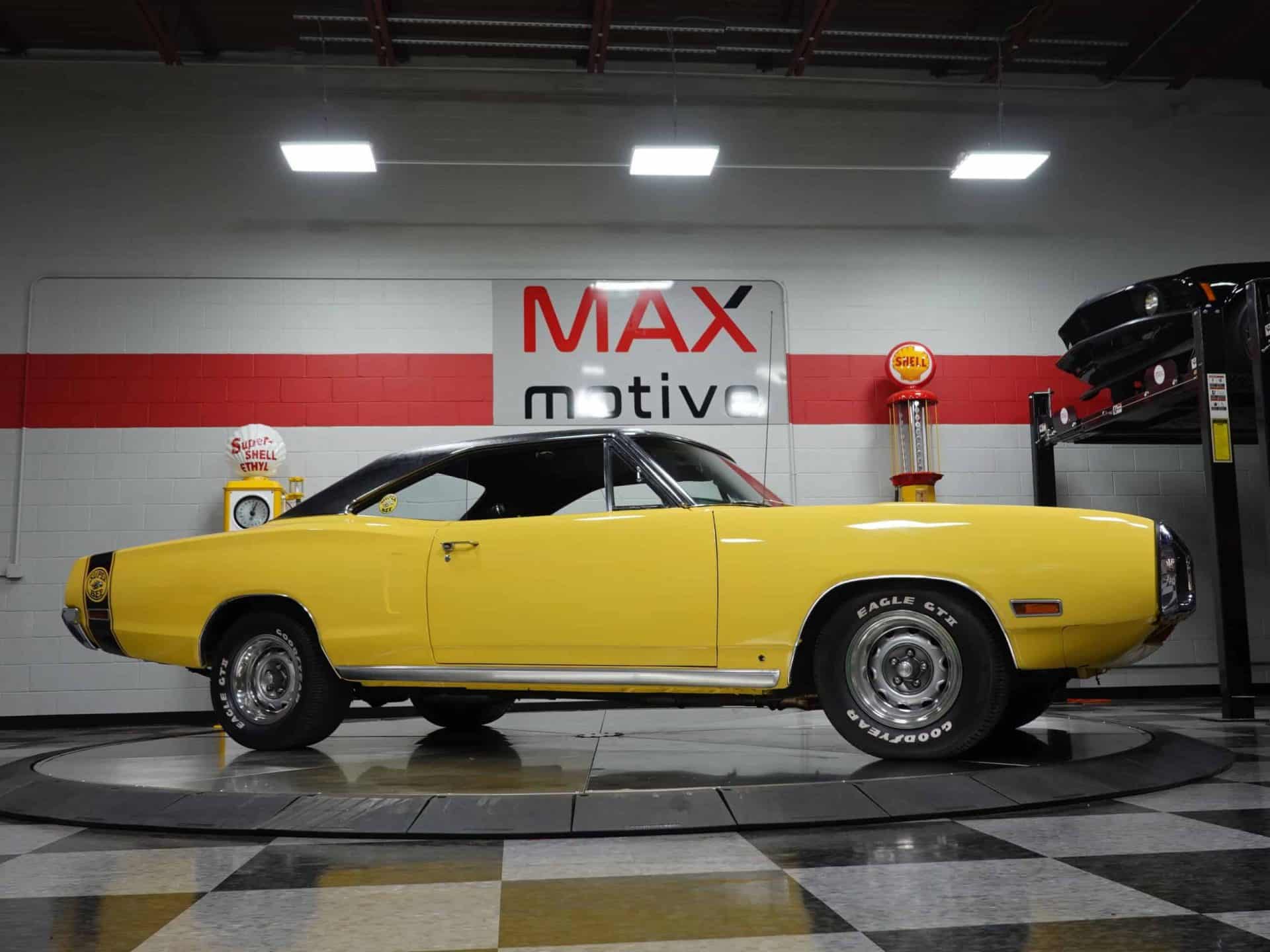 Now starring in the Maxmotive Pittsburgh showroom is this very special 1970 Dodge Coronet Super Bee. It was built by the Performance Team at Mr. Norm’s Grand Spaulding Dodge, and was driven by Edward Norton in the 2002 Spike Lee film “25th Hour.” But this movie star Mopar stands on its own, even without the film credits. The 440 engine has the coveted Six-Pack setup with an Edelbrock aluminum intake. It also sports Hedman Elite Thermal Coated Headers, a COMP Cams bumpstick, MSD ignition, a Pro Torque starter, and finned aluminum valve covers from Mopar Performance. It runs through a 4-speed transmission with a Hurst shifter with Piston Grip to a 4.10 Dana rear axle. Even a hot rod has to run flawlessly during filming, so studio cars are often worked on by top professionals. Along with all the other top tier hardware, the reliable March Performance one-inch serpentine belt drive is evidence of this. The Top Banana paint and of course, the Bumble Bee stripes give it a great Mopar muscle attitude. The Super Bee upgrades were done at the legendary Mr. Norm’s Grand Spaulding Dodge. A thorough restoration includes the paint, striping, headliner, carpeting, vinyl roof, and polished stainless. Mechanical work includes a transmission rebuild, rebuilt clutch, COMP Cams timing chain and gear set, electric water pump, Holley fuel pump, new fuel tank and lines, and rebuilt brakes. Powder coated Rallye wheels with Goodyear Eagle GTII tires provide the classic look with modern performance. “25th Hour” was the first major motion picture to be filmed in New York City after 9/11, and it was highly acclaimed by critics and fans. Yet this muscular 1970 Dodge Coronet Super Bee stands on its own as a Mr Norm built, 440 Six Pack, Hurst Pistol Grip 4-speed, Scat Pack icon. The dash was signed by Spike Lee and Edward Norton; and highly collectible movie memorabilia comes with the car including posters, the Touchstone Pictures press kit, and the original script, which is signed by Spike Lee. See it at Maxmotive Pittsburgh or at maxmotive.com. Lee and Norton said it best. Under their signatures on the dash are the words, “Thanks for the cool ride.”