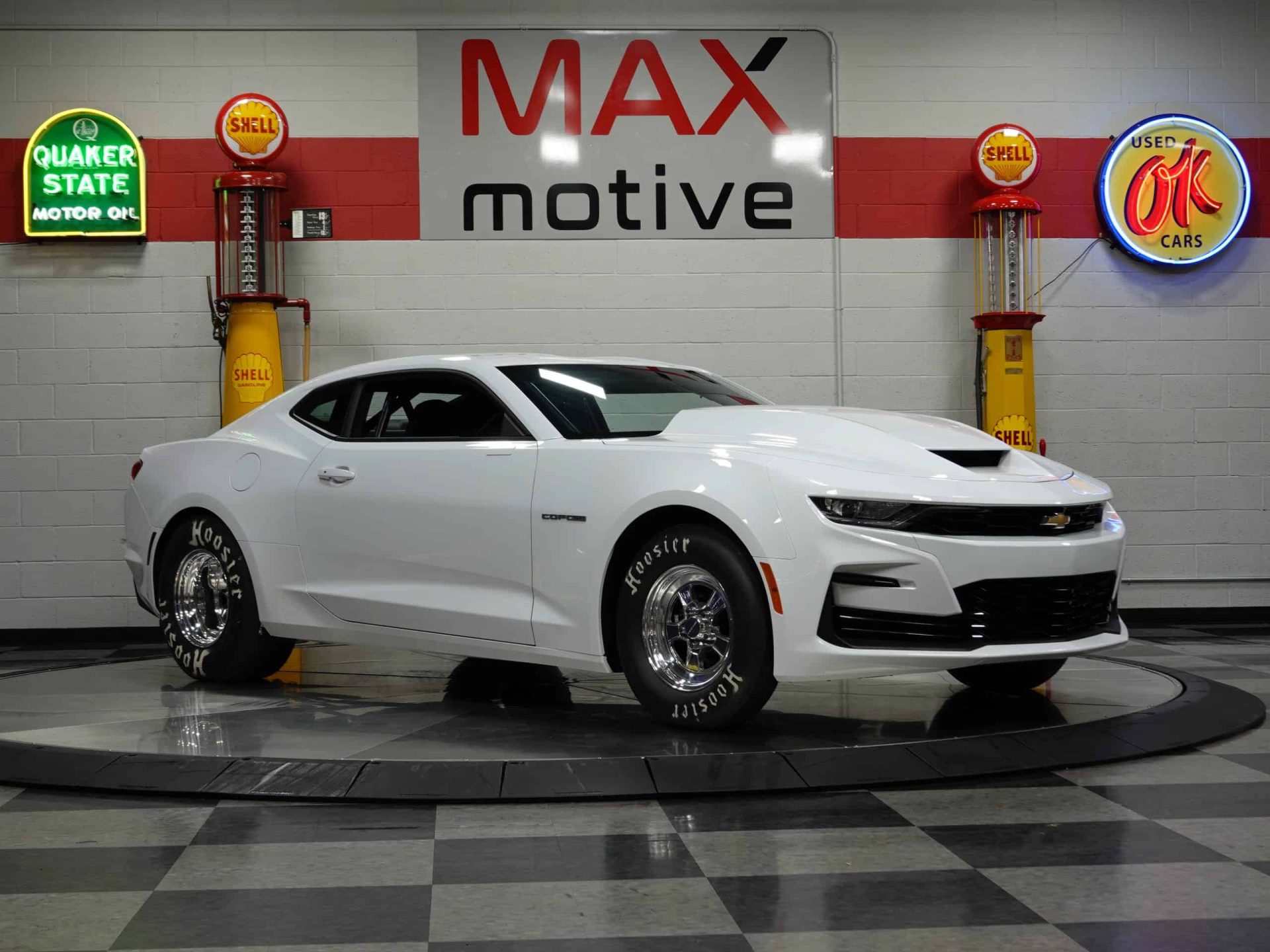 All original, like new, and never raced, here’s a unique opportunity to acquire a 2019 Chevrolet COPO Camaro 50th Anniversary from the MAXmotive Pittsburgh Showroom. This highly refined factory race car is number 48 of just 69 produced, in commemoration of the legendary 1969 COPO Camaro. No modifications have been made to the car other than what was done at the factory; it is complete as built down to the original tires. A beautiful COPO50 binder contains the 2019 COPO Camaro P/N 20199562 User’s Manual. This treasure provides invaluable, thorough and complete content such as procedures from start-up to storage, recommendations, all torque specs, and an original parts list. COPO50 grille and fender badges identify the package, but a closer look reveals such items as a COPO50 tach with shift light and gauges by Autometer. The 427 Engine includes the Anniversary Appearance Package with an orange block, Chrome Valve Covers and Black Intake Manifold. And the billet Bogart wheels display the COPO50 logo on the spokes and center cap. Part of the advantage of a GM factory race car is their vast roster of business connections. The company took a smart “leave it to the experts” approach with the COPO, so an all-star cast of manufacturers contributed to this all-out, state-of-the art machine. The Naturally Aspirated 427 engine is fed by a Holley EFI system, while other familiar and highly respected names include Hurst, Simpson, Aeromotive, Mahle, Callies, Cam Motion, ATI, K&N, Clevite, and Strange. And a package of contingency decals is included to maximize your payday. It’s all business, but a nice touch is the power windows, for quick pick up of your winner’s slip at the ET shack. Anyone who has attempted to build a race car can appreciate the craftsmanship here. In fact a gentleman by the name of Dean Underwood proudly proclaims he assembled this masterpiece with a plaque under the hood. Also included are a car cover, and a large portfolio of COPO related articles and books. GM’s press release proudly boasts that with the 1969 COPO, “drag strip success evolved into collector car distinction, with the comparative handful of ZL1-engined models among the most coveted muscle cars with collectors today.” It’s certainly reasonable to expect a similar outcome for the COPO50. Said Jim Campbell, GM US VP of Performance Vehicles and Motorsports (Now there’s a cool job!) Chevrolet is proud to celebrate 50 years of the COPO Camaro legacy. It’s one of the most enduring legacies in drag racing, with a powerful past and fast future.”